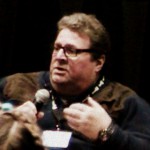 Bob Liston, a long time disability rights activist, and a research associate for RTC: Rural, is retiring.  Bob began his work at the RTC in 2008 with a focus on nursing home emancipation for people with disabilities, and over the last seven years has participated in research on violence and abuse against men with disabilities and helped develop a peer training program for Centers for Independent Living.  His most recent project was conducting outreach to disability stakeholders to get their input on RTC research projects and product development.

At the age of 16 some loose gravel sent the vehicle that Bob was driving down the side of a mountain, causing a spinal cord injury and paralysis from the chest down. Ever since, wheelchairs have assisted Bob to have a pretty typical life that included Bachelor’s and Master’s degrees, a long work history, mentoring many younger colleagues,  marriage to his soul mate, Marsha, and a life of advocacy and activism in disability rights. Several years ago, Bob was inducted into the Montana Disability Hall of Fame.

Living with a disability meant Bob encountered many physical barriers that prevented access to classes, businesses, the homes of friends, and even the offices of service providers that were supposed to assist people with disabilities. Those barriers, institutionalized discrimination, and the pervasive tyranny of low expectations, which nearly everyone had about his prospects for the future, led Bob to be part of establishing one of Montana’s first Centers for Independent Living (CIL), and a variety of wheelchair sports teams. In midlife he became an active member of ADAPT, the nation’s largest grassroots disability rights activist group, and a charter member of Not Dead Yet, a group that opposes legalizing assisted suicide because of the negative impact on people with disabilities and those who are low income, and the potential for exploitation and abuse of older people by those who stand to profit from their deaths.

Reflecting on his work at the RTC, Bob said, “Given that I have never been very interested in research, I have often wondered how I ended up at a research organization, especially because the research process from idea, to grant writing, to award, to implementation, to writing it all up takes years. However, during the past seven years I have been part of some research that provided evidence based results that proved what we in the disability community already knew and lived. Unfortunately, policy makers and funding agencies won’t always take the word of those of us with experience lived every day, so having research that validates our experience can help us accomplish the changes we already know are needed. As in most of the jobs throughout my working lifetime, I feel I have learned more from my wonderful colleagues at the RTC, the Rural Institute, and our partner organizations than I feel I have contributed.”

When asked what has been his most meaningful experience during his tenure with the RTC, Bob said, ” I think I have several answers to that. First, I have loved mentoring younger colleagues, and sharing my experiences and expertise as a person who has lived every day for over 40 years as a person with a disability hailing from a rural background. All research can benefit by meaningful involvement of the people being studied.  And secondly, I will always carry with me the incredible courage of the men who shared their experiences with me when working on a cutting edge grant that explored the abuse and neglect of men with disabilities. Even though men with disabilities have long experienced abuse, it has often not been acknowledged by the wider public, and they have not been encouraged to report it and ask for support. I hope our work helps to change that. Finally, I have loved working with staff members of CILs all across the country. These are the folks on the front line, and it has been my great privilege to work with them and learn from them.”