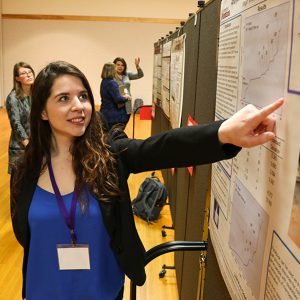 Megan Miller presents her poster, which features her work on RTC:Rural’s Healthy Community Living project, on April 28, 2017 as part of the University of Montana Conference on Undergraduate Research.

On Friday, April 28, 2017, undergraduate student researcher Megan Miller presented a poster titled “Analysis of Factors Contributing to a Facebook Presence” at the 16th annual University of Montana Conference on Undergraduate Research.  Miller is a junior psychology major at the University of Montana, and completed the project with RTC:Rural for independent research credit during the 2016/2017 school year.

Miller’s research is part of a broader project at RTC:Rural called Healthy Community Living (HCL).  She worked closely with the HCL project leaders to develop and carry out her research over the course of the school year. HCL is part of a five year grant to produce an innovative online multi-media health promotion program. Using a participatory curriculum development process, RTC:Rural researchers are working closely with partners at Centers for Independent Living and advisors around the country, as well as individuals with disabilities, to develop and test curriculum material.

A beginning step for Miller was figuring out how to attract followers to the HCL Facebook page, which is being used to engage and involve people with disabilities, community members, and service providers in the creation and refinement of HCL’s health promotion curriculum. Specifically, the HCL Facebook page is a tool to collect input on specific curriculum content, as well as to curate a collection of photographic and video media for inclusion in the online program.

Miller examined analytics collected from the HCL Facebook page from October 2016 to April 2017, focusing specifically on the number of followers and number of reactions garnered by posts.

Facebook followers are individuals who choose to receive updates when a new post is added to a particular Facebook page. Reactions are ways for Facebook users to interact with posts by selecting an emotive icon, or emoji, to rate how they feel about the post. Options include “like,” “love,” “haha,” “wow,” “sad,” and “angry.”

Miller said her favorite part of the experience was the poster presentation. “I was really nervous at first, because I had never done anything like this. I remember I was working on my poster with [RTC:Rural Director] Craig [Ravesloot], and we were like, it’s finally coming together and everything makes sense. All of the work we all put in was shown on something, and I really enjoyed that part.”

Miller thought about graduating a year early, but instead decided to use her full scholarship and pick up a Global Public Health minor. After she graduates from UM she plans to head to graduate school. “I’m looking into the Clinical Psychology and School of Psychology graduate programs here and everywhere else, and seeing what they all have to offer,” she said. “But it’s hard; I’ve kind of fallen in love with Missoula.”

After working with HCL, Miller said she’d like to continue her work with social media. “I’d be interested in working with other organizations to help improve their social media presence,” she said. “Creating content is super interesting to me now that I’ve worked with HCL, especially since I was able to be part of the whole process and see how it all works.”