Temporary employment may be becoming permanent

As the recession wears on and unemployment benefits begin to expire, long-term recovery to pre-pandemic levels may become elusive, yet again leaving people with disabilities behind.

END_OF_DOCUMENT_TOKEN_TO_BE_REPLACED 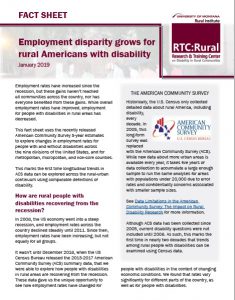 In December 2018 the U.S. Census Bureau released the 2013-2017 American Community Survey summary data. In the recently released fact sheet “Employment disparity grows for rural Americans with disability,” RTC:Rural researchers used this data to begin exploring how employment rates have changed for people with disabilities in the context of changing economic conditions. They found increasing disparities between people with and without disabilities across the country as well as across the rural-urban continuum.

Click the links below to download the fact sheet from the RTC:Rural and Rural Institute ScholarWorks collection:

END_OF_DOCUMENT_TOKEN_TO_BE_REPLACED

Full size images of these maps, and further analysis and text description of them, can be found on the RTC:Rural website at this link: Maps of Disability and Employment.