This chart compares the employment status of individuals with and without disability. Within each group individuals are either employed, unemployed or not in the labor force. Individuals are considered employed if they worked within the last week or identify as having employment but did not work within the last week (e.g. on vacation, sick, or other temporary absence). Individuals are considered unemployed if they did not work within the last week, do not identify as having employment but have been activity looking for work during the past 4 weeks or anticipate being called back to a job from which they were laid off. These first two categories, employed and unemployed, make up the labor force; all other individuals are considered “not in the labor force”. This group is comprised of individuals not actively seeking work (e.g. students, seasonal workers, homemakers, institutionalized individuals) or individuals engaged in incidental unpaid family work (of less than 15 hours a week). For more on ACS variable definitions see the 2014 subject definitions guide. 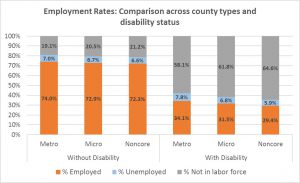 Click here to view this data presented as maps of disability and employment rates.

This work is part of the RTC:Rural Geography of Disability Project.