Rural landscapes dominate American geography. Depending on the definitions used, rural areas account for 72% to 97% of the total landmass of the United States. However, only a minority of Americans live in rural areas (approximately 15-19% again depending on the definition). Yet, people living in rural areas represent a higher percentage of people who are unemployed, living in poverty, are elderly, and experience a disability. Further, it has been well documented that individuals with disabilities living in rural areas face unique challenges in acquiring services and supports. For example, rural residents typically rely on services that are more informal and less specialized; must travel farther and pay more for those services; and tend to receive lower quality services than their urban counterparts (Whitener, Weber, & Duncan, 2001; Dabson & Weber, 2008).

Ideally, services, programs and policies are based on up-to-date information about the people and places on the ground (locally, regionally, nationally). While Census data about more urbanized areas have been available in contiguous years, data about rural America have been limited.  This is particularly relevant for disability data as from 2000 to 2013 when there was no new disability data available for rural areas. This knowledge gap has impacted our ability to understand or track changes in the needs of people with disabilities living in rural communities. As a result, policy makers and program planners have been left in the dark while advocacy efforts highlighting the needs of people with disabilities in rural America have been hampered. There is an urgent need to update analyses of the geographic distribution of people with disabilities living in rural America to provide data necessary to improve policy and program development.

The objective of this study is to depict the distribution and demographics of people with disabilities living in rural areas and the services available to them.

The American Community Survey (ACS) replaced the U.S. Census’s long-form sample of the population’s characteristics in 2005. Historically, the long-form provided detailed data about rural America, including disability, every decade. However, questions about disability were not included in the new ACS until 2008. While new data about more urban areas is available annually, it takes five years of data collection to accumulate a sufficient sample to conduct the same analyses for more rural areas because the ACS only samples 2.5% of the population every year. The ACS collects data on demographic variables such as age, sex, race, ethnicity, income, employment, disability, education, transportation, household size, housing tenure, and utilities.

The ACS does not directly measure disability. Instead, it uses questions related to difficulty and functional impairment to identify individuals who may experience a disability. Not all age groups are included in every question. For example, only people aged 15 years and older are included in the independent living difficulty question. The ACS asks six questions related to functional limitation:

Though the ACS is a rich and comprehensive data source it is not without limitations. Rural researchers, in particular, are acutely aware of these limitations. The continuous nature of ACS data collection and the resulting sample size impacts the availability and validity of the data, particularly for rural areas. ACS data is aggregated as it is collected and then released in 1 year, 3 year and 5 year estimates. For urban areas (geographies with populations of 65,000 more) data is available across all estimate groups. However, for rural areas throughout the United States (geographies with populations of 20,000 or fewer), data must be aggregated across 5 years in order to collect a suitable sample size to produce reliable estimates. This means that even though the ACS oversamples rural areas, researchers can still only use 5 year estimates for rural counties. Even with data collected across 5 years the sample sizes for some subgroups (i.e. disability) at some geographies (i.e. counties) remain very small resulting in less reliable population estimates with large margins of error. The larger the margin of error the less reliable the estimate. In fact, for some variables, at some levels, the margins of error can be the same size or larger than the estimate itself, compromising the accuracy of the estimate.

An accurate, precise, and standardized definition of rural is necessary to develop effective policies and deliver meaningful services. Such a task is difficult because there are multiple definitions used by various governmental agencies and non-government (Cromartie & Bucholtz, 2008; Enders, Seekins, Brandt 2005). In this report, we use the Office of Management and Budget (OMB, 2013) county classification, which classifies metropolitan counties (“urban”) and nonmetropolitan counties (“rural”). Nonmetropolitan (rural) counties can be further split into two categories: micropolitan and noncore counties.

The maps and chart below explore the 2010-2014 ACS 5-year (Table S1810) disability estimates by county type (OMB county classifications). The ACS asks a set of disability indicator questions to determine disability, if a respondent can answer “yes” to any disability question they are classified as having a disability. 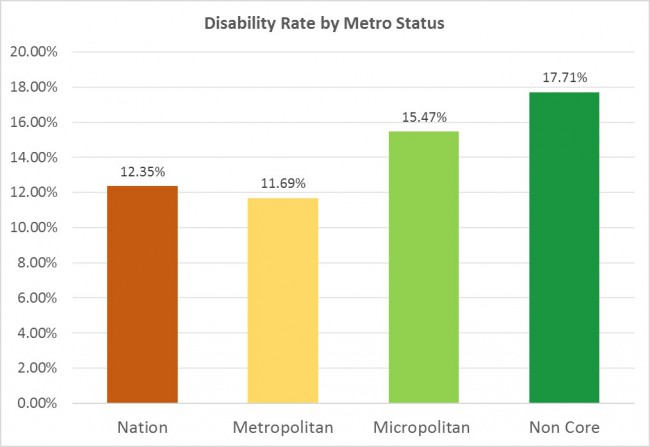 Clearly, disability matters for rural America, but why is this? In the past policy makers and researchers have speculated that these higher rates could be due to the older population of rural counties. Indeed, the national rate of individuals aged 65 years and older is 13.6% of the population but this number increases to 15.7% in micropolitan counties and 18% in noncore counties, mirroring disability rates. Explore these data further in the map below and the links that follow. 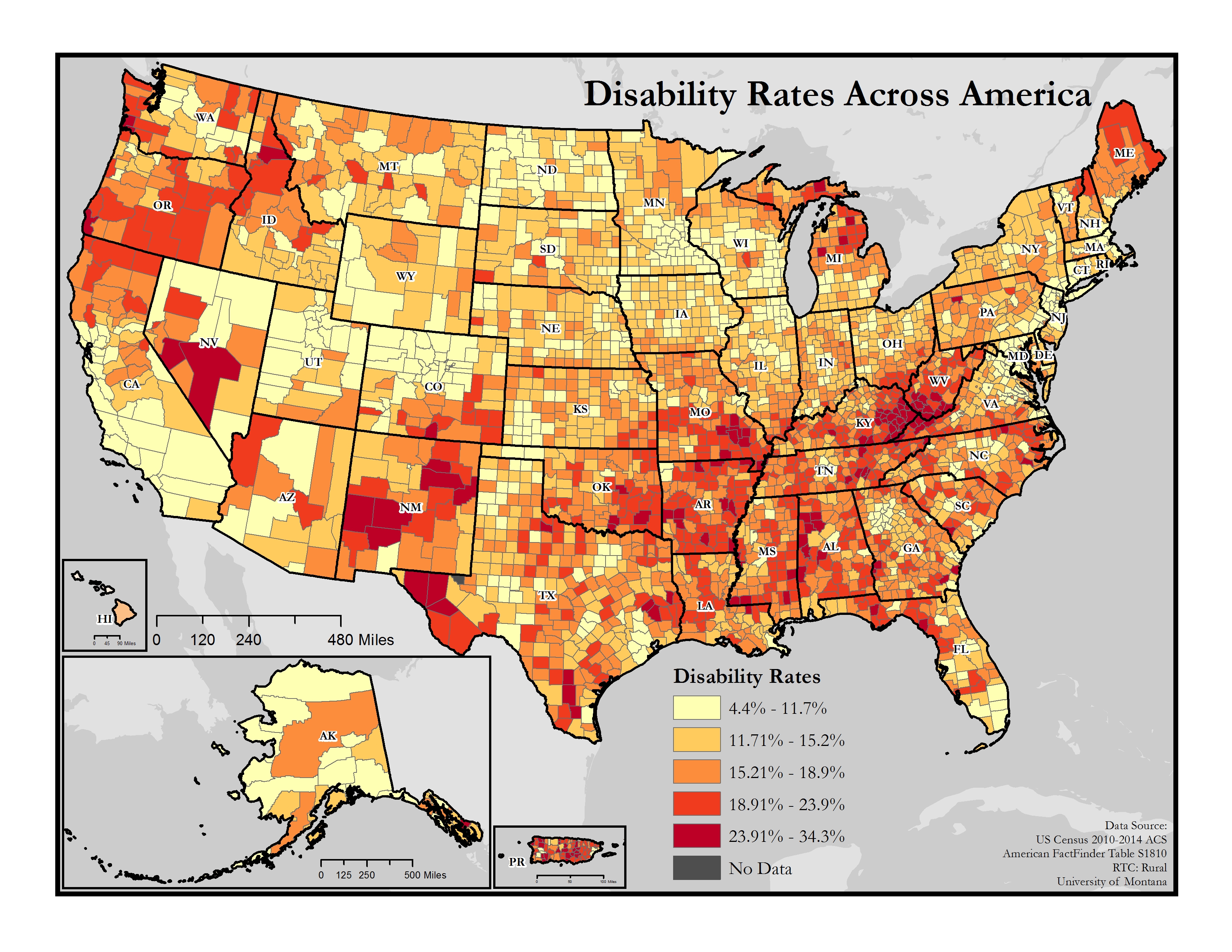 To download or view the most up-to-date data on disability rates by county, visit our Disability Counts Data Finder webpage You may also click here to view maps of general disability rates across America.

This map of the United States shows general rates of disability by county. Rates are broken into five categories ranging from 4.4% to 34.3%. Rates tend to be highest (18.91 – 34.3%) in the South Eastern United States (particularly in Appalachia), and lowest (4.4 – 18.9%) in the Northern Great Plains and Rocky Mountain West. These regions are all very rural regions of the United States. This map was produced in July 2016 based on 2010-2014 American Community Survey data.

Click on the links below to explore more data about disability demographics across the United States including maps and graphs:

Disability by Census Region and Division

Disability by Age and County

Disability by Type and County

Disability by Race and Hispanic Origin

This work is part of the Geography of Disability Project.

Funding: Our research is supported by grant #90RT50250100 from the National Institute on Disability, Independent Living, and Rehabilitation Research within the Administration for Community Living, Department of Health and Human Services. The opinions expressed reflect those of the author and are not necessarily those of the funding agency.