Understanding the needs of a community is imperative in order to effectively plan for natural disaster emergency response. As Hurricane Florence continues to impact the Southeast coast, national, state and local community emergency planners are working to evacuate and shelter thousands of people who are fleeing their homes.

People with disabilities are one of many vulnerable groups especially at risk during natural disasters. In times of emergency, people will evacuate with their households, and will need to shelter with their households. It is not acceptable to separate families and households in times of crisis. Many family members are caregivers, so shelters need to be accessible so that people with disabilities and their families and caregivers can stay together.

People with disabilities: About 41 million, or 13%, of Americans have at least one type of disability.  The vast majority (38 million) live in households with other people and a significant number of people with disabilities live in group quarters, which includes dormitories, nursing homes, and prisons.

(See Prevalence of Disability: Individual and Household Context for more about this research).

In the areas at most risk from Hurricane Florence, there are particularly high rates of disability at the county level. This map shows disability rates by county across the U.S.

Click on the map for a larger, downloadable and shareable version and a text description. 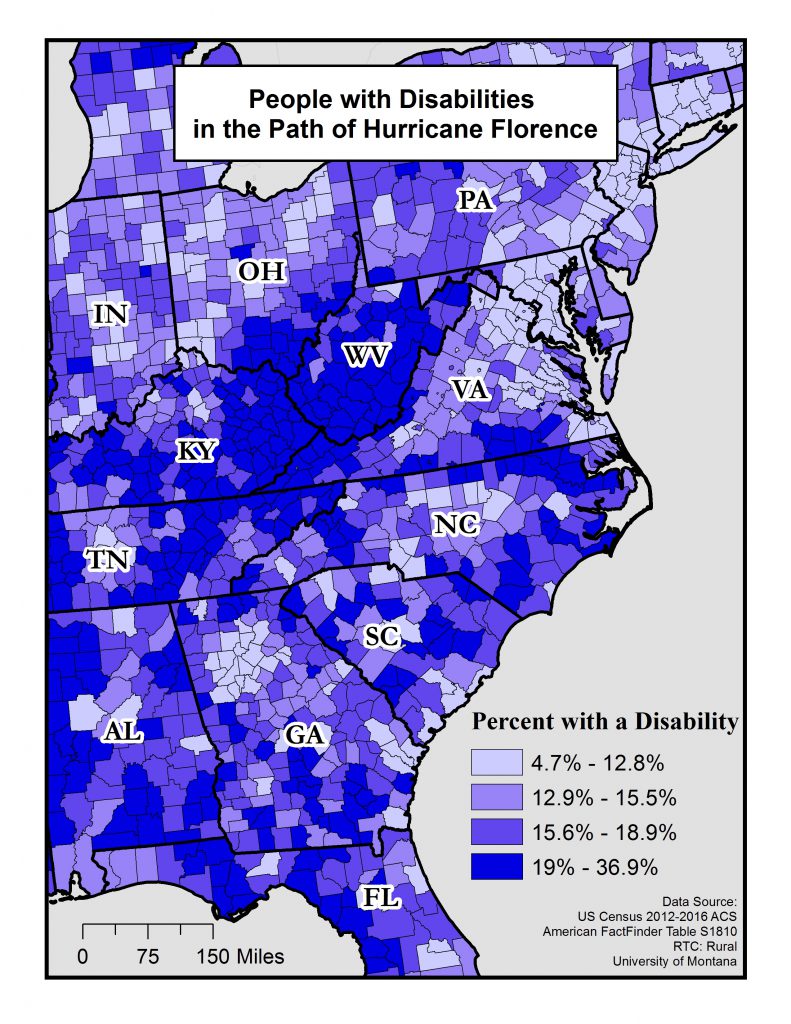 The map above shows the percent of people, by county, estimated by the ACS to have disabilities in the Southeastern region of the United States. Disability rates are broken into four levels: 4.7-12.8%, 12.9-15.5%, 15.6-18.9%, and 19%-36.9%. Darker purple indicates a higher rate. The map shows counties just inland from the coast in North Carolina, South Carolina, and Virginia as having high rates of disability (19% -36.9%). 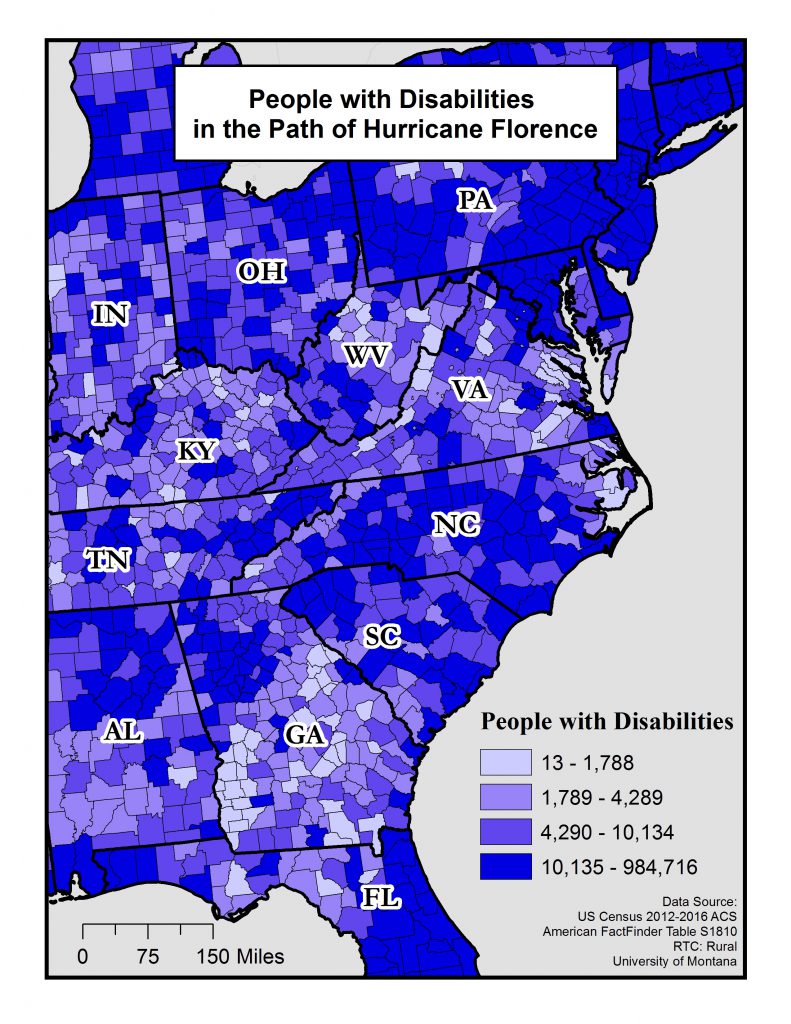 The map above shows the number of people, by county, estimated by the ACS to have disabilities living in the Southeastern region of the United States. Population is broken into four levels: 13 – 1,788 individuals, 1,789 – 4, 289 individuals, 4,290 – 10,134 individuals, and 10,135 – 984,716 individuals. Darker purple indicates a higher population. The map shows counties with large populations of people with disabilities (10,000 and more) throughout North and South Carolina, and the northern coast of Florida.

Our Disability in America map series breaks out this information. We have created maps that show rates of impairment type at the county level for the U.S. We use data from the American Community Survey (ACS), which does not directly measure disability. Instead, it uses questions related to difficulty and functional impairment to identify individuals who may experience a disability. The ACS asks six questions related to functional limitation:

See Rural Matters: The Geography of Disability in Rural America for more information about the ACS and our work on disability demographics. 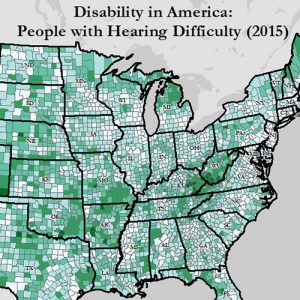 Our maps break out each of these functional limitations:

We also have created maps that show the disability rate in rural counties, among veterans, by gender, and the poverty rate among people with disabilities, each broken out by county across the U.S. All of these maps can be viewed and downloaded here: Geography and Rural Disability Maps

FEMA works with national disability groups to make sure that emergency plans and shelters are inclusive and accessible. FEMA’s Office of Disability Integration and Coordination created a document titled Guidance on Planning for Integration of Functional Needs Support Services in General Population Shelters to help emergency and shelter planners meet access and functional needs in general population shelters.

For more information on people with disabilities and emergency disaster response, see: