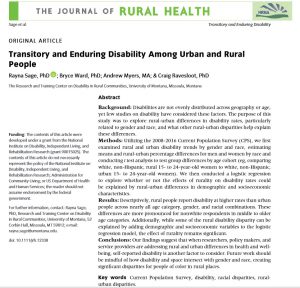 First page of the article “Transitory and Enduring Disability Among Urban and Rural People” in the Journal of Rural Health.

It has been shown that people in rural areas experience higher rates of poor health and chronic illness than people in urban areas. This relationship is exacerbated for people of color. Like health, disability also varies across geography and within individuals over time. Some people with disabilities have enduring, or permanent disabilities, and others have transitory disabilities, which come and go over time. Overall, there are gender and racial differences in disability rates between rural and urban areas.  Women experience higher rates of disability than men do overall, but those rates are higher in urban than rural areas, and men are the opposite, though not to the same extent. It is also important to take into consideration the social determinants of health, such as education and employment, as these too vary across locations and gender and race.

In this study, Sage, Ward, Myers, and Ravesloot analyzed data from the 2008-2016 Current Population Survey (CPS). The CPS is conducted by the U.S. Census Bureau, and the data is used to estimate labor force participation and important factors related to employment.

The researchers found that rural residents report higher rates of disability for nearly all age, gender, and race combinations, with rates for nonwhite adults being the most pronounced. Even when they consider educational attainment and labor market participation, these racial differences in disability rates still persist. “In the midst of great concerns about the increase in early deaths and decrease in overall health for white rural Americans, it is important to remember that there are still very stark racial disparities that need our attention,” said Dr. Sage. 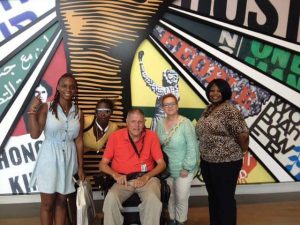 Knowing that there are higher rates of enduring disability at younger ages in rural areas has implications for health care, social security, and long-term care services. “It appears that rural residents may need services and supports to help people with disabilities at younger ages,” said Myers. “Policies and programs targeted toward a younger audience may be an effective way to offset the observed differences in disability rates between rural and urban areas.”

“Understanding how disability rates vary across geography, and how they are related to socioeconomic factors across different age, gender, and race groups adds valuable information to our understanding of rural-urban differences,” said Sage.

This article builds on previous RTC:Rural research (“Disability Items From the Current Population Survey (2008-2015) and Permanent Versus Temporary Disability Status,” published in the American Journal of Public Health in 2017), which found that a significant proportion of individuals respond inconsistently to the questions used in many government surveys to identify people with disabilities. Instead of identifying only those with permanent, enduring disabilities, these questions also identify those with transitory disability, or disability that comes and goes over time.